There remains in safety a rather naive assumption that if we could simply get workers to do their jobs safely, the accidents would go away.  If workers were the only variable in the safety formula, this would be true.

However, when we examine the complexities of most work environments, we find that worker behavior is influenced by a number of factors.  People do not make decisions in a vacuum.  Their thinking, surroundings, past consequences, and cultural reinforcers play a critical part in their decisions.  Peer observation and feedback is just one example of possible influences.  One of the most effective and sustainable strategies to improve safety involves understanding, measuring, and managing the influences on risk taking.

This simple four-part model is one that hundreds of organizations have used effectively to improve safety.  It has proven powerful due to its simplicity, practicality, and ease of use compared to other, more complicated models of risk causation and human error classification.  Most importantly, it is action-oriented and prescriptive. Once a reason for risk is classified and quantified, a method of solution can be quickly identified and proactively implemented.

When this model is put into practice, it quickly becomes evident that if one worker is influenced to take a risk (consciously or subconsciously), others are as well.  Proactively understanding and addressing the influences on risk at the cultural level provides superior opportunities for sustainability of safe group behavior and reduction of exposure to risk, when compared to the traditional approach of addressing individual behavior.

The model also helps to classify the reason for the risk by categorizing worker’s answers to the “why” question.  Here is how the model works: When a supervisor or peer sees a potential risk, they express concern to the worker(s) involved and gather insight by asking about the rationale for performing a task in a certain manner.  This discovery-learning conversation, more often than not, provides upstream safety indicators in the form of influences on risk.

The response to the question provides profound knowledge which is classified into one of four influence categories.  The four categories of response are: perception, habit, obstacle, and barrier. 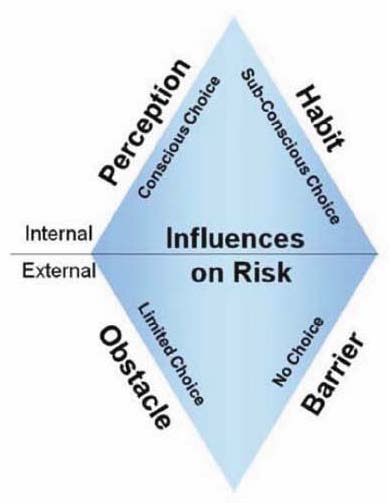 Hazard recognition is not just about seeing a hazard.  It is about mentally acknowledging that “it could happen to me.”  Many workers who have been injured had the knowledge of the potential hazard but, lacked a sense of vulnerability.  This is often due to the inability to identify the potential consequences of low-probability risks.

Unfortunately, the common measurements in safety tend to perpetuate this undesirable mentality (i.e., zero accidents means we are safe; it is safe as long as you do not get injured, etc).  If someone frequently takes a risk but remains injury-free, the perception of risk tends to become skewed.  When the rationale for the risk is questioned, the response one will hear will be similar to one or more of the following:

While "habit" is not a scientific term, it is used in common language and is typically easy to understand when explaining the model. Dictionary.com defines habit as “an acquired behavior pattern regularly followed until it has become almost involuntary”.  A person will make a decision to perform a task in a particular manner until subconscious mental templates are created.  Once enough experience has been obtained, the individual no longer has to consciously think about the task.

When is the last time you had to consciously think about opening a door?  You have developed a template for opening doors, and the thinking now occurs subconsciously.  This is similar to how a work habit is formed.

Habits, like perceptions, are within the control of the worker to change.  However, they are not changed in the same manner.  Information will often change a perception; it will not necessarily change a habit.  Habits are deeply engrained and rooted into the patterns of human behavior and require repeated antecedents, or reminders.  The required frequency and spacing of these reminders will differ depending on the complexity of the task and the length of time the habit has been formed.

When questioned about the rationale for a risk, a habitual response will often sound like:

An obstacle is something that makes it difficult to perform a task safely or take a safety precaution.

Obstacles are often inadvertently created during design or modification of work stations or operational processes.  Common obstacles include inconvenient location or difficult access to tools and equipment.  The removing or reduction of obstacles, most often, is not within the control of workers.

When questioned about the rationale for a risk, a response to an obstacle will often sound like:

A barrier makes it impossible to perform a task safely or take a precaution.  It is best for barriers to be responded to first, as they negate the ability to perform the task safely or take safety precautions that control exposure to risk.  Complete unavailability of correct tools or equipment, or lack of anchors or tie-off points for fall protection, are examples of barriers.

When questioned about the rationale for a risk, a response to a barrier will often sound like:

Once the influence has been identified and categorized, appropriate action can be taken to address it.

For perception influences, distribute information about the risk through training, articles/talks in safety meetings and help from managers or supervisors.  Stress the importance of the particular risk in accident reports, add risk avoidance techniques to new-employee orientation and discuss risks and risk avoidance in pre-job briefings and shift huddles.

For habit influences, increase the number and frequency of reminders in target areas through signage to prompt action, behavioral observations, offering reminders in safety and other meetings, creating a buddy system to have workers remind each other, and distributing pocket reminder cards.

For obstacle and barrier influences, first identify the issue from accident and observation data to determine exposure rate, and then define the potential impact of inaction and ask for help in removing the obstacle and barrier from management or engineering and, finally, apply the hierarchy of control model.

This holistic model has been successful due to its positive impact on culture, systems, and individual actions.  The traditional approach to "correcting individuals" often only solves a problem short term.  Identifying and modifying influences produces long-term results that span generations of employees and managers.

When leaders first ask "why" to gather insight, rather than quickly blaming or confronting, it creates an ongoing safety forum between management and employees.  In doing so, a climate is created in which discussions about the problems and opportunities to improve safety are more culturally acceptable.  Additionally, expressing concern and asking for the rationale behind the decision has proven to be a more effective method to change individual behavior.  Direct confrontation often can cause a defensive response, or worse, conceal the underlying reason for the risk.