The popularity of models like The Bradley Curve indicate a hunger to understand safety culture and develop a roadmap to excellence. Moving through the three stages is more concrete than many academic models that describe the artifacts or characteristics of culture to address. But few of these models capture the whole picture of safety excellence, in which culture is just one element. They are descriptive but not prescriptive, describing an ideal culture without prescribing the steps to move an existing culture in that direction.

In our consulting, which has impacted over 1600 sites, we have found that those who achieve true safety excellence (which includes an interdependent safety culture) methodically address four major elements and two minor ones. The major elements are: strategy, leadership, employee engagement, and culture. The two minor, but important, elements are the role of safety professionals and safety metrics. While safety culture is a major element, it is so strongly impacted by the other five that working on culture without addressing other elements is ineffective. 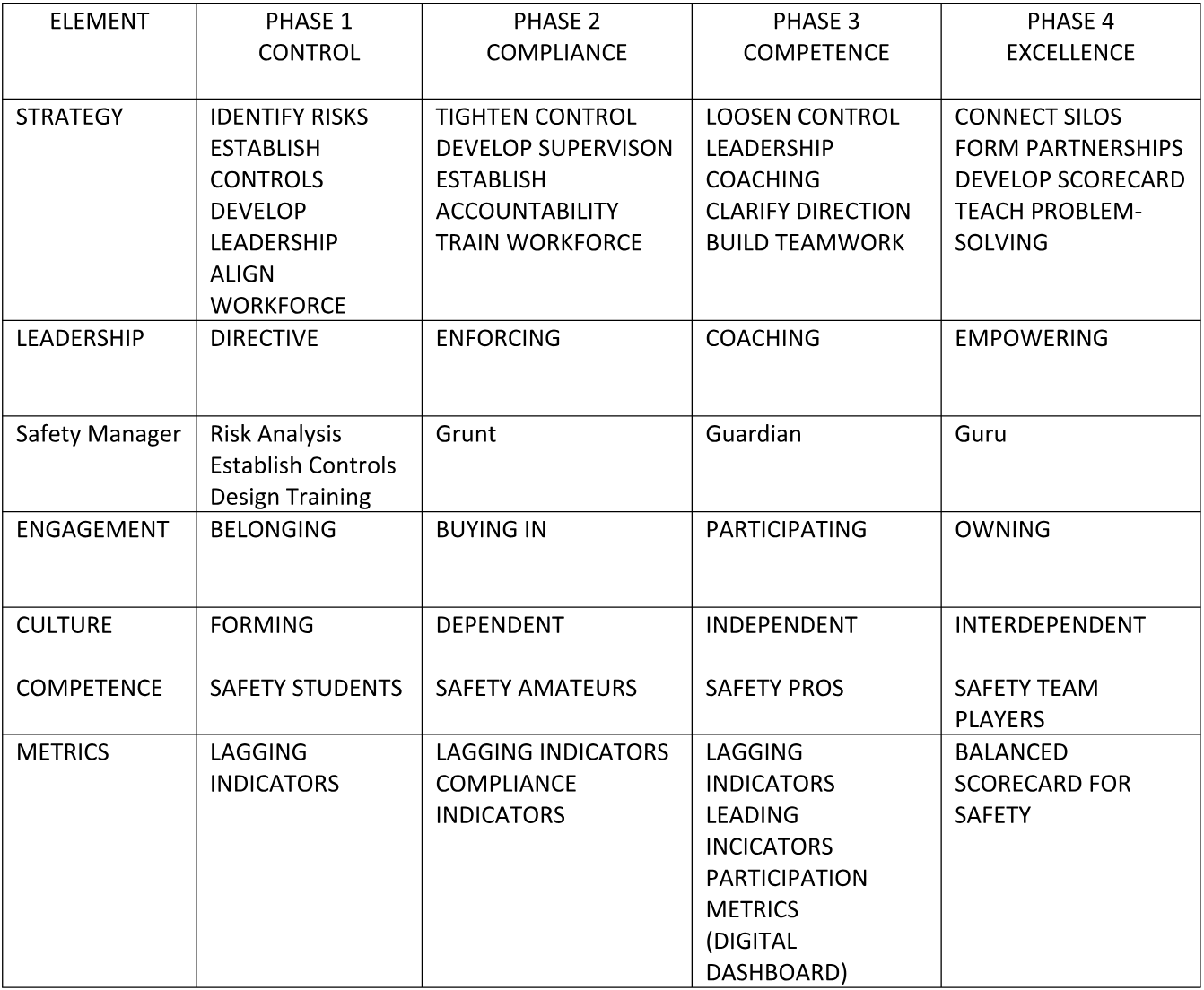 This approach of envisioning an ideal culture and wishing toward it is barely tactical and definitely not strategic. The sad truth we find as consultants is that most organizations we assess don't have a safety strategy, and the few that do often have a conflicting production strategy that competes with safety for priority. Cultures do not progress through the three stages if strategy is lacking or remains stagnant. Organizations that achieve safety culture excellence do so strategically by targeting the changes needed and focusing the whole organization not just on the goals but also on the methodologies to achieve them. Strategy must be specific but remain flexible to address changing and evolving realities. If strategy does not evolve to support desired culture changes, the culture remains as unchanged as the strategy.

Strategy should dictate leadership style and that style should facilitate the desired state of the culture. If leadership is strongly command-and-control, a dependent culture will not evolve toward independence. Leaders must direct and support such a change by shifting themselves and their focus on leading the culture by example as well as by direction. Sadly, too many leaders are proceeding as they always have with their leadership responsibilities and hoping the culture will evolve as they desire. The old saying, "When the leaders lead, the followers follow," applies strongly to culture change.

Safety professionals are leaders also and need to evolve their roles to facilitate cultural change. When workers are just learning about safety, safety professionals must direct their efforts. When workers begin to take initiative, safety folks must change from directors, to providers, to supporters, to expert information resources. Sadly, most safety departments are understaffed and the people staffing them get caught up in reactive activities and never evolve themselves, mush less the culture. When safety managers are constantly putting out fires, they don't think strategically about how to prevent them. Many safety departments need the same progress, from dependent to independent, that they wish on their cultures.

A critical part of safety strategy is directing how and how much to engage employees in safety efforts. Most of our clients tell us they want their workers to be more engaged, but few have really defined what that engagement looks like or adopted specific measures to make it happen. Depending on the current state of the culture, engagement strategies should first target creating a sense of belonging: pride in the organization and a sense of team. The next step is sharing the rationale for improving safety to create buy-in and strong emotional attachment. When that step is achieved, the next should be to create involvement opportunities for workers to get some hands-on participation in safety efforts. Once the majority are participating, the next step is to create ownership for safety. Deming said, "People support what they create." Giving creative input is one way to create ownership, but not the only one. Creative leaders have found many organization-specific paths to creating a greater sense of ownership in safety efforts. A key to getting engagement to the ownership level is to make the goals of safety people-related rather than focusing on numeric goals. Ownership is about the heart, not the head.

The culture is what all this is about, but an important fact is too often overlooked: culture is a byproduct. It cannot be directly impacted but must be controlled through other factors. The other elements in the chart ARE those factors. It is also important to realize that these stages, dependent to independent to interdependent were taken from Stephen Covey's book, The 7 Habits of Highly Effective People, and were describing individuals, not cultures. The DuPont Bradley CurveTM is a stretch of applying one to the other. However, cultures often do go through a progression in which they need direction, then need less, then work together to achieve safety. The real issue is how to get the culture to progress through these stages and that involves strategically managing these other elements toward that goal. It is also important to assess the current state of your culture so you know your proper starting place and don't make your efforts too advanced or remedial.

Measurement is not management, but it is a necessary tool of management. If you cannot measure process or outcomes, you don't know with certainty that your efforts are producing the desired results. Organizations striving to progress their culture through these stages seldom have a metric to tell them where they are in that progression or whether they are moving in the desired direction. Leaders tend to have opinions of where they are and if they are moving, but those opinions are seldom based on factual data. Everyone is required to measure lagging indicators and often use them as indicators of success or failure. However, more sophisticated metrics are required to achieve safety excellence. The ultimate goal is not just to measure more but to understand the algorithms between the metrics in a balanced scorecard approach.

This model not only includes The Bradley Curve vision of success, but spells out specifically how to achieve it.