From Edicts to Discretionary Effort: Maturing Your Safety Culture

Social worker and consultant, Mary Parker Follett, described management as "the art of getting things done through people." Appropriately descriptive as this may be, this highlights the need to recognize the difference between management and leadership. Managers focus on accomplishing tasks through the efforts of others, whereas leaders inspire others to want to do more than what is required and/or perceived as currently possible. Are you managing your safety performance and culture, or leading it?

It is possible the first use of management to organize activity dates back 100,000 years, with the recently discovered Adam's Calendar, the African Stonehenge. However, it is hard to know whether the final product was born from forced or discretionary effort. Today, much of what we know about and experience of management was prompted by drastic changes beginning in 1750 in what has been called the first industrial revolution, and later the capitalist economy.

With momentous growth and change in populations, this evolution transformed societies like never before. Individuals began leaving their rural farm lands and setlling around population centers. Between 1867 and 1914, the Technological Revolution occurred, bringing new inventions and technologies (i.e., internal combustion engines, electricity, chemicals, etc.) and a migration to mass-manufacturing. Managing activities of multiple people in a focused direction became a daily chore, ultimately producing the explosive growth of management sciences and methodologies.

The Integration of Safety and Business Thinking

What we have learned through these innovations (e.g., Lean Manufacturing, Behavioral Management Theory, PDCA, Theory of Constraints, Balanced Scorecards, just to name but a few) can in many ways be applied to safety. While it is the desire of safety professionals to ultimately integrate safety into the fabric of business thinking and activities, never forget the criticality of integrating business thinking into the fabric of safety. If the business goal is excellent performance, a culture where people want to excel and are excited to add value, is managing safety and its desired outcomes any different? Consider the figure below: where do you find your organization on the Safety Performance Excellence CurveTM? 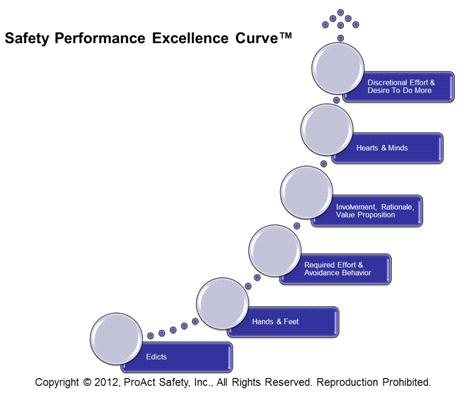 The great Henry Ford was once quoted as saying, "Why is it every time I ask for a pair of hands, they come with a brain attached?" After the second industrial revolution, where much of the management structure was modeled after military hierarchy of that time, the goal was to move hands and feet; thinking wasn't part of what managers needed from hired hands. As our society has progressed, the need to capture hearts and minds has become business critical.

Businesses still relying on the command and control model would be interested to learn that even the military is evolving. In a March 2011 TED Conference talk titled Listen, learn ... then lead, Retired Army Brigadier General Stanley McChrystal pointed out the changes in the landscape of military operations and the new role of relationships when he stated, "Instead of giving orders, you are now building consensus and you're building a sense of shared purpose." He went on to say, "It has forced me to become a lot more transparent, a lot more willing to listen, a lot more willing to be reverse-mentored from lower."

With all the other competing forces (e.g., changing priorities, activities, economy, personal issues), what percent of the employee's attention do you capture with safety? Are they sold on safety or are you still struggling to market a message? Moreover, if you have their attention for fifteen minutes, what do they remember from your message and what sticks with them when they are randomly polled two weeks later?

Regardless of what you call it, 'hearts and minds' or 'want to vs. have to', what are you doing to inspire a culture of intrinsically-motivated individuals? Don't misunderstand, one cannot rely solely on leadership and forego the important role of management in performance. Things, activities, documents, machines and results all need to be managed; people, however, need to be influenced and led. If your goal is performance excellence in safety, you must eventually move past the belief that compliance is all you need. Similarly, if your goal is Safety Culture Excellence, realize there is no difference; compliance behavior is still the minimal necessary.